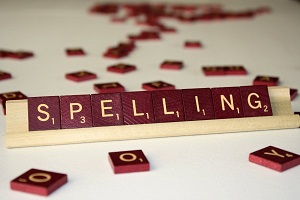 It always amuses me when someone insists that their family name is spelled a certain way. I summarize this obstacle to research as the "that's not my ancestor; we spell our name with an e" syndrome.

Here are some basic rules about spelling:

#1 Many of your ancestors may not have known how to spell their own names.

Don't assume universal literacy. Not everyone, even today, can read and write. Don't assume that parents taught their children any one particular way of spelling their name. In addition, I have encountered a number of situations where children decided to spell their name differently at different times in their life for any number of reasons. Additionally, their own family members may not have known or ever heard the name they were given at birth or they may have forgotten.

#2 Many people were known only by a nickname and never used the name they were given at birth.

Buba, Butch, Nate, Abe, Chuck, Don, Ed, Fred, Gus, Hi, Ike, Ken, Len, Mac, Ned, Ove, Pete, Rob, Sam, Tom, Vic, Wes and so forth can be the actual given name or a nickname. Likewise, Abby, Barb, Cy, Deb, Eddie, and on and on, can be the given name or not. Except at birth, the ancestor's real name may never have been used in their entire life. Don't ever assume that the name recorded in the record was the name they went by in their day to day life.

#3 They wrote what they heard.

Many of the records we rely on to search out our ancestry may have been created by someone other than the ancestor. It is quite common for people to fill out a form or write a document for others. For example, the U.S. census enumerators were often dealing with people who did not speak English very well or at all. Understanding what was said as the name may have been difficult or impossible and creativity was rampant.

#4 The use of a family name or surname varies from culture to culture.

It is important to realize that as you research names back in time the naming conventions may have changed. The most common change in names from Western Europe was the shift from patronymics where the children adopted the first or given name of the parent with a suffix. For example, Jens Petersen's children would use the name Jensen rather than Petersen. Jens Petersen's father would have been named Peter. Depending on the country, this type of naming pattern usually disappeared over time or as mandated by various governments. In many European countries the wife would take the name of her husband upon marriage. But this practice was not universal and in some countries the wife retains her own name after marriage.

#5 The pool of names used by any given family or culture may have been very small.

When you get right down to it, relying primarily on names in doing genealogy research can be hazardous to your health. It is much more productive to rely on locations. My initial introduction to this problem came when doing Danish research for my ancestor Jens Jensen. When I asked about finding him at the Family History Library in Salt Lake City, Utah, I was given a microfilm roll with probably 20,000 or so people all named Jens Jensen. I realize immediately that places were more important than names.

#6 The way a name was spelled was unimportant until industrialization.

Historically, names for the common folks were not that important. If you go back far enough, you will find that common people, without land or property, vanish from the records. It was only when industrialized countries needed people for wars, taxes or commerce that names began to be important and recorded for everyone. As you go back in your research, be sure you know when this change began in the country you are researching.

For example, when the Spanish Empire expanded into the Americas, almost all of the indigenous names were replaced by names acceptable to the Catholic Church. This practice was not limited to Spain however. In many instances the conquerors imposed their language and culture on the people. Not only did the names of the towns and streets change, but also, in some cases, the names of the people. The Bureau of Indian Affairs and its predecessors did the same thing in the United States when Indians were forced to go to government-run schools. Sometimes, men were forced to change their name when they entered the army.

#8 Immigrants often changed either the spelling of their name or their name entirely.

There is a huge amount of inaccurate folklore surrounding the arrival of immigrants in any given country. Most common is the inaccurate belief that the U.S. government ordered people to change their names. I am aware of many immigrants who changed their names even before they left their homeland. But this is a major obstacle for researchers. It can be almost impossible to discover the original name of an immigrant ancestor and persistence is very often required. Insistence on a particular spelling of any name from the historical past (or even the present) is one of the most persistent obstacles to genealogy research. I have instances in my own family where my ancestor's surname was spelled one way before immigration, another way after immigration, changed back to the original spelling by one or more of the immigrant's descendants, and then changed back to the changed form by the next generation.

Many times, in examining old documents, you will find the same person's name spelled in more than one or two different ways. One of the most famous examples of these variations is the name of William Shakespeare. Here is a quote from Wikipedia on spelling of Shakespeare's name as an example:

The spelling of William Shakespeare's name has varied over time. It was not consistently spelled any single way during his lifetime, in manuscript or in printed form. After his death the name was spelled variously by editors of his work and the spelling was not fixed until well into the 20th century.

All I can say further is you need a very liberal attitude when looking for people by name.


Related Topics on This Site